As we left the Boulder Beach Campground, we stopped at the Lake Mead Rec Area Visitor's Center. 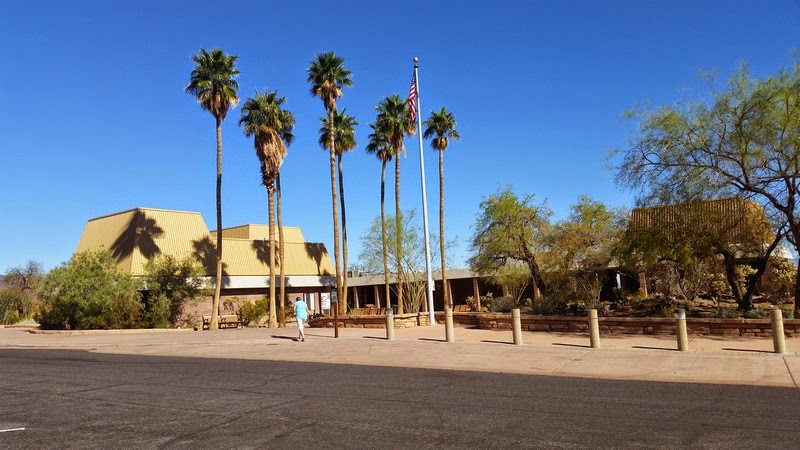 Stamped our passport, browsed the place, and took one last picture of the Lake Mead area. You can just barely see our campground in the picture. 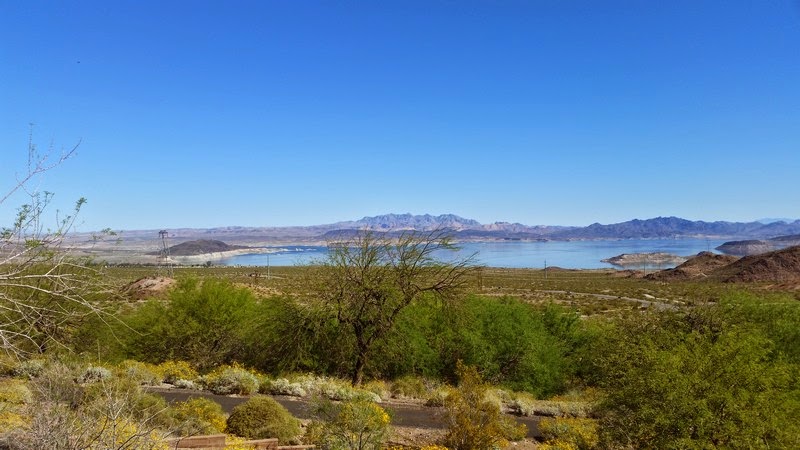 Then we drove across the bridge overlooking the Hoover Dam. Maybe next time, we will stop and do the tour. Things are limited when you don't have a Toad. 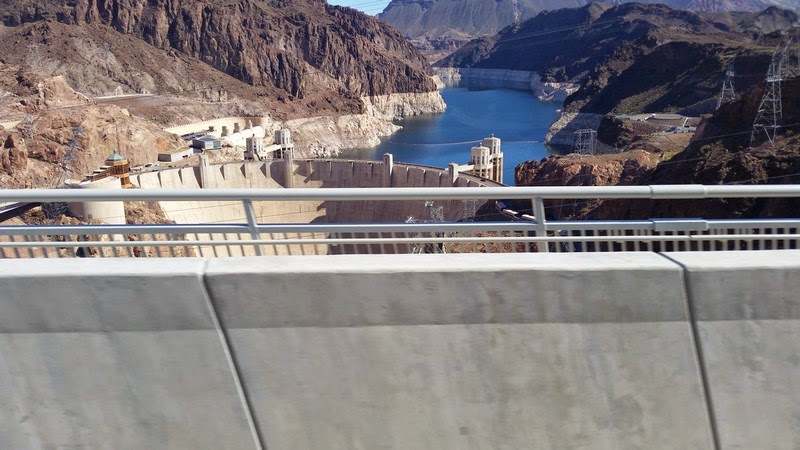 Through Henderson, with a stop at Walmart, and on up the Boulder Highway. 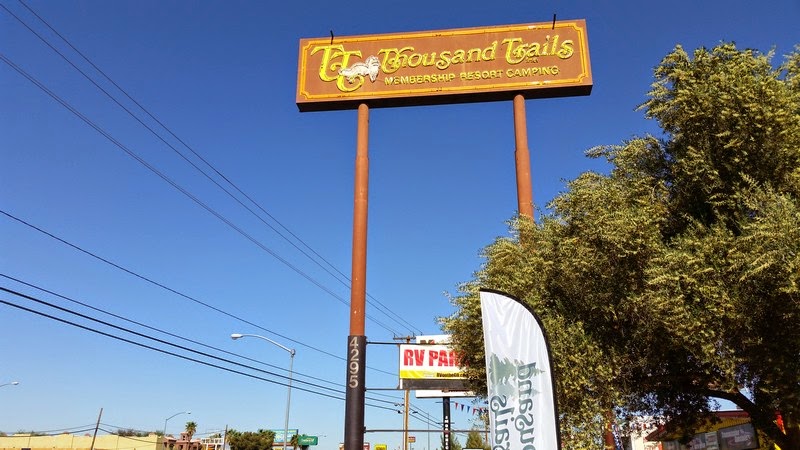 The driveway to the check-in station. 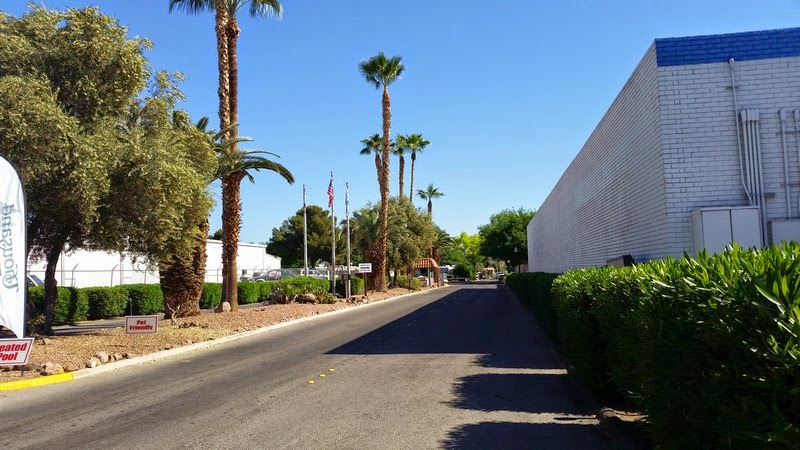 Now this is a tight park. 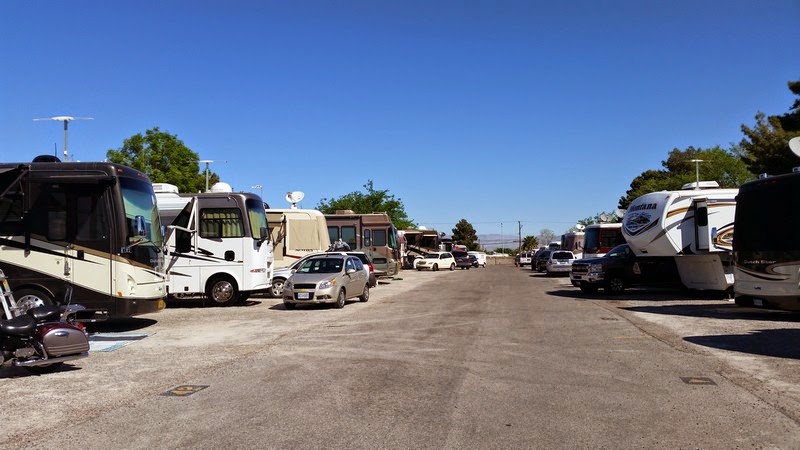 Here we are, in space 71. Good thing we didn't have a toad. There was no place to park one at our site. 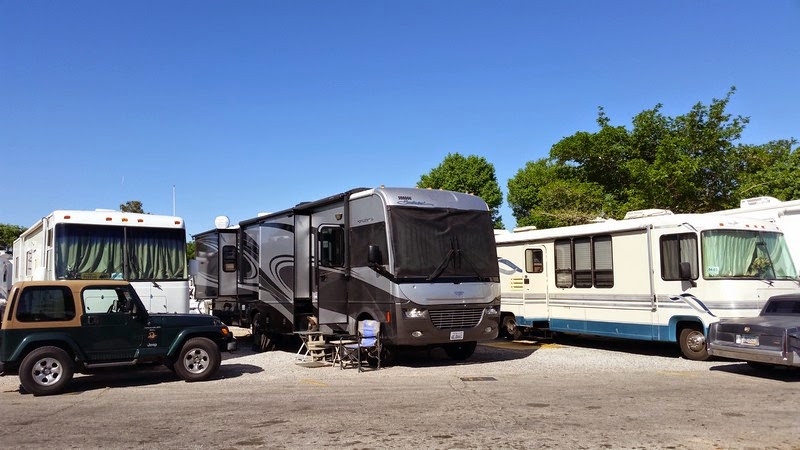 Even though it is crowded, there is a nice activity center and pool area. 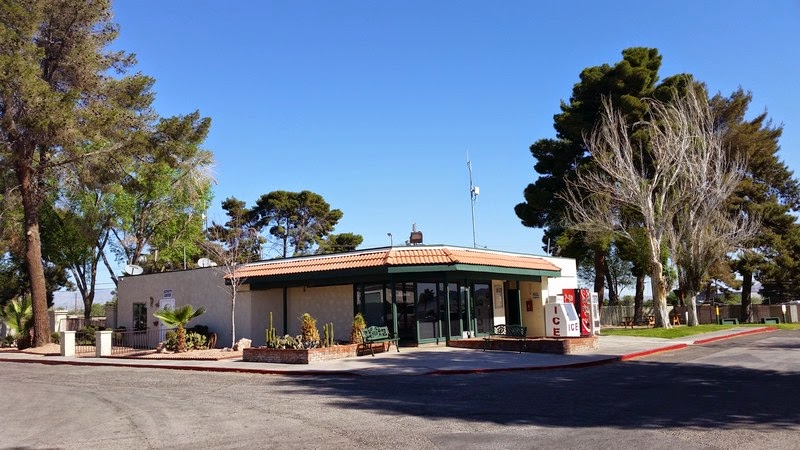 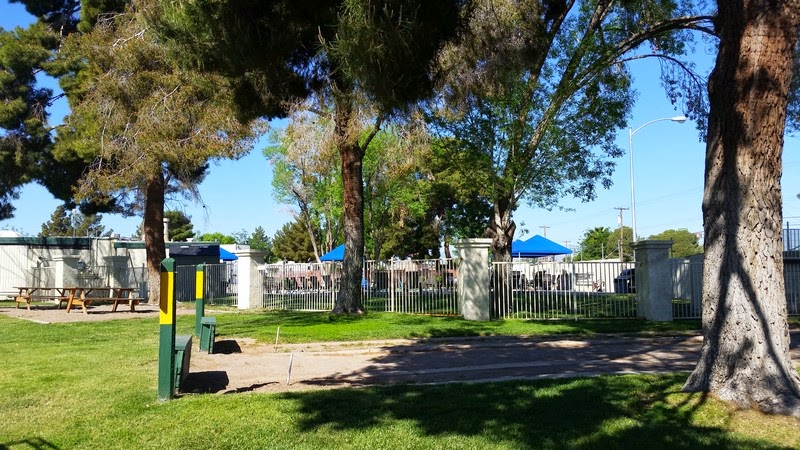 And the Wifi even works pretty good there.

We haven't been to the downtown area or Strip yet. I have been doing a few things to the RV.

When I was inspecting the roof (which is in really good shape), someone did a crappy job of caulking. Look how thick it is. 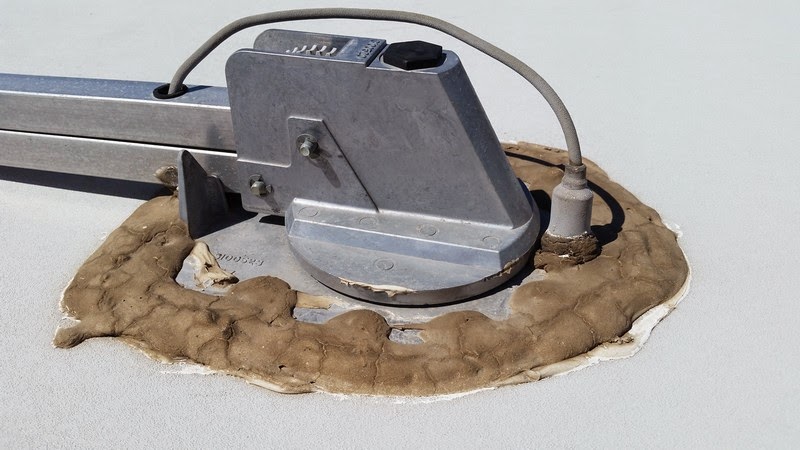 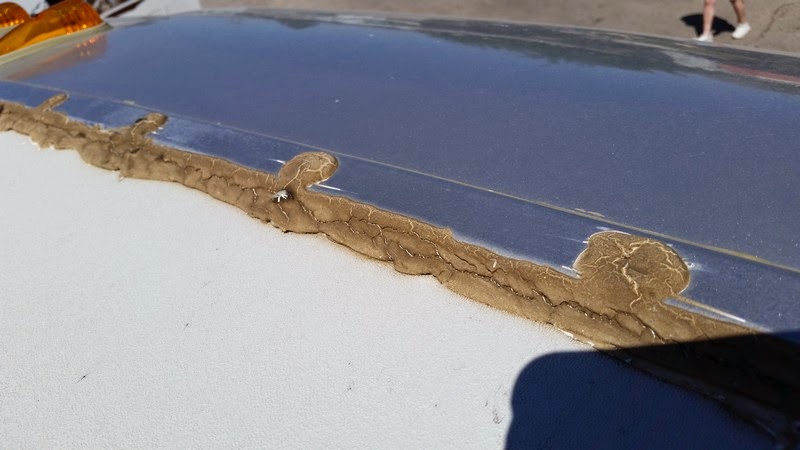 So I peeled quite a bit off and laid down a nice amount of Dicor. Under the thick junk I took off, it really was sealed pretty well, it just looked ugly. Much better now.

Here is where my 4 solar panels will go. 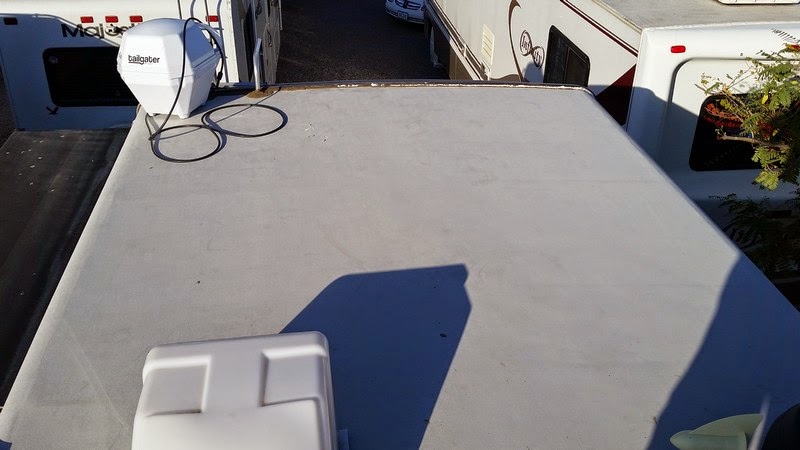 We had a bit of an issue the other day. It could have been bad.

It happened in the cabinet that held the bedroom (dinosaur) tv. After removing the tv, I tucked the A/V cable and coax cable along the back wall and Donna turned the tv cabinet into a storage area.

While doing laundry, Donna smelled something burning and heard a sparking/arcing noise. We had sparks in the back of the cabinet. I reached in and pulled out the coax cable ... and ZAP!!! It arced against a screw in the side of the cabinet. 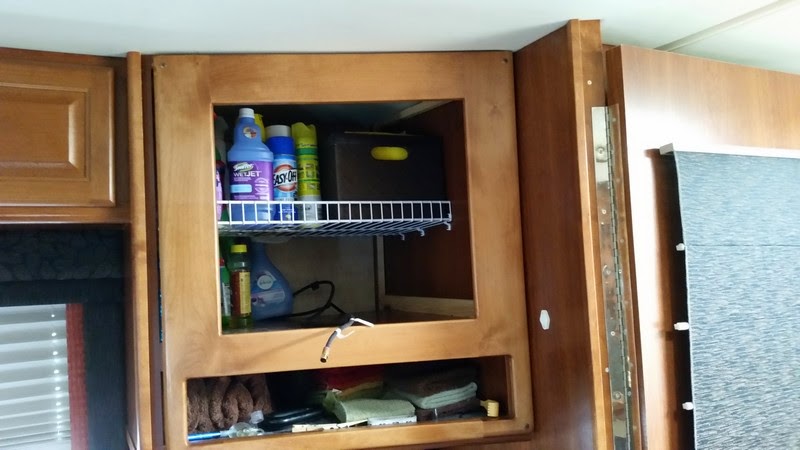 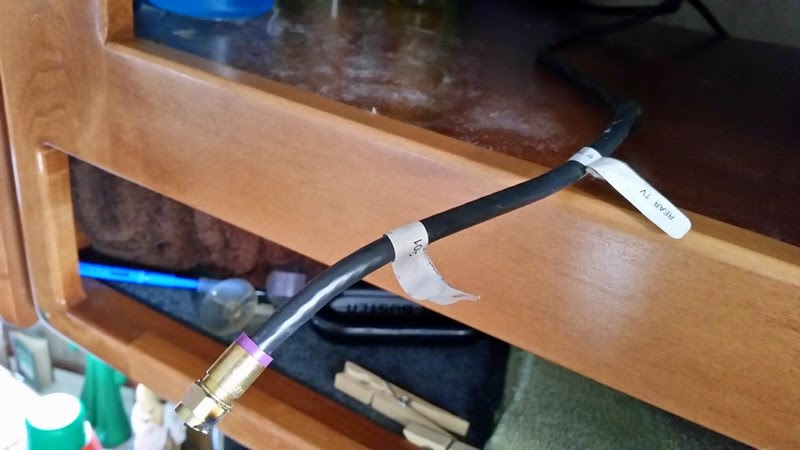 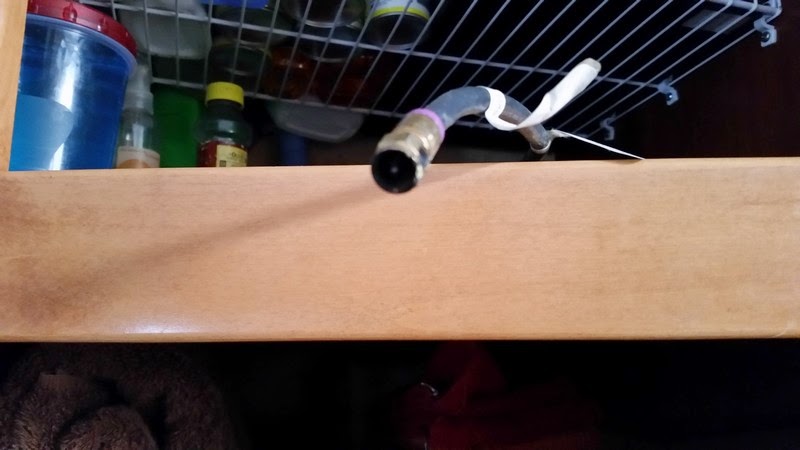 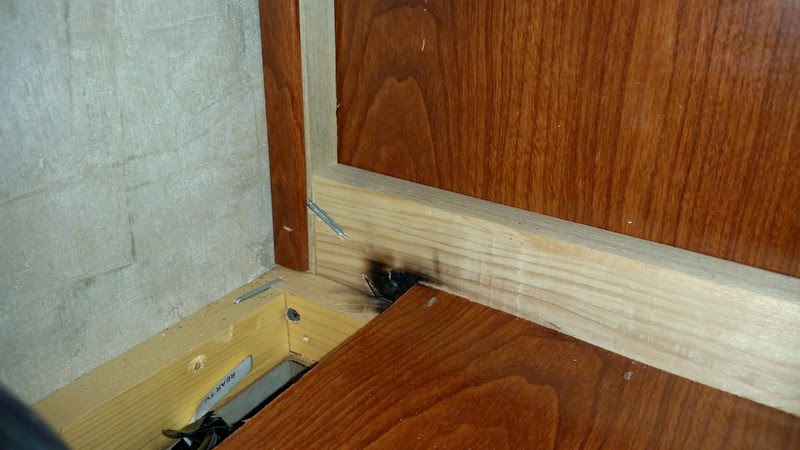 I got my multimeter out and determined that this particular sheetrock screw had 120 VAC on it. It looked factory installed. My guess is that it was screwed into an electrical Romex cable. After flipping breakers and determining which one it was, I removed power and turned the screw a few turns and then when I turned it back on, the screw was no longer hot.

Yep, it could have been pretty bad. I think it will all be ok now. I bet that there is a piece of Romex in the wall that has a little nick in the insulation. There should be nothing else in the wall that is grounded that would touch it. But it was pretty exciting there for awhile.

Oh, and all of a sudden, my Cannon EOS camera died. It won't come on at all. I measured the battery.. and it is good. Bummer. I did buy it a long time ago and have really used it. I think it cost $899.00 back then and was only a 8 Meg camera. But I have taken over 19,000 photos with it. I think I have gotten my money's worth out of it. Time to go shopping.
And finally some venting.

While at the Good Sam rally in Phoenix, I was walking through the vendor area and stopped at the Verizon Wireless booth to ask some questions about my recent smartphone problems. As I was walking away, the guy ran up to me and notified me that I could upgrade to the new style Jetpack at no cost. Really? I went back to his booth and he pulled out a new style Jetpack and activated it.
Cool??

It worked just as good as my old one, but I figured it had a newer battery in it so all is good. ??

Then my new VZ bill was available online so I went to check it out. I was not only charged $40.00 for my 'free' upgrade, but was now in a 2 year contract! OK, I'm getting excited now!

I called customer service 3 times and they pretty much told me I signed a contract and it is binding. They couldn't do anything.

I told them that IF the VZ Rep came up and told me that IF I exchanged my perfectly working Jetpack for a newer one, AND for just $40.00 too, I could now be under a 2 year contract. I don't think so!!!

Oh well. What can I do? I have the new Jetpack and I'm sure I will be with Verizon for the next two years, but it's the principle of the thing!

Maybe tomorrow, we will take the bus into the hustle bustle of Vegas and walk our little legs off. Even though my big camera died, we have our smartphone cameras, and they work just fine.
Later.... 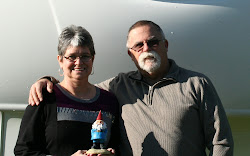